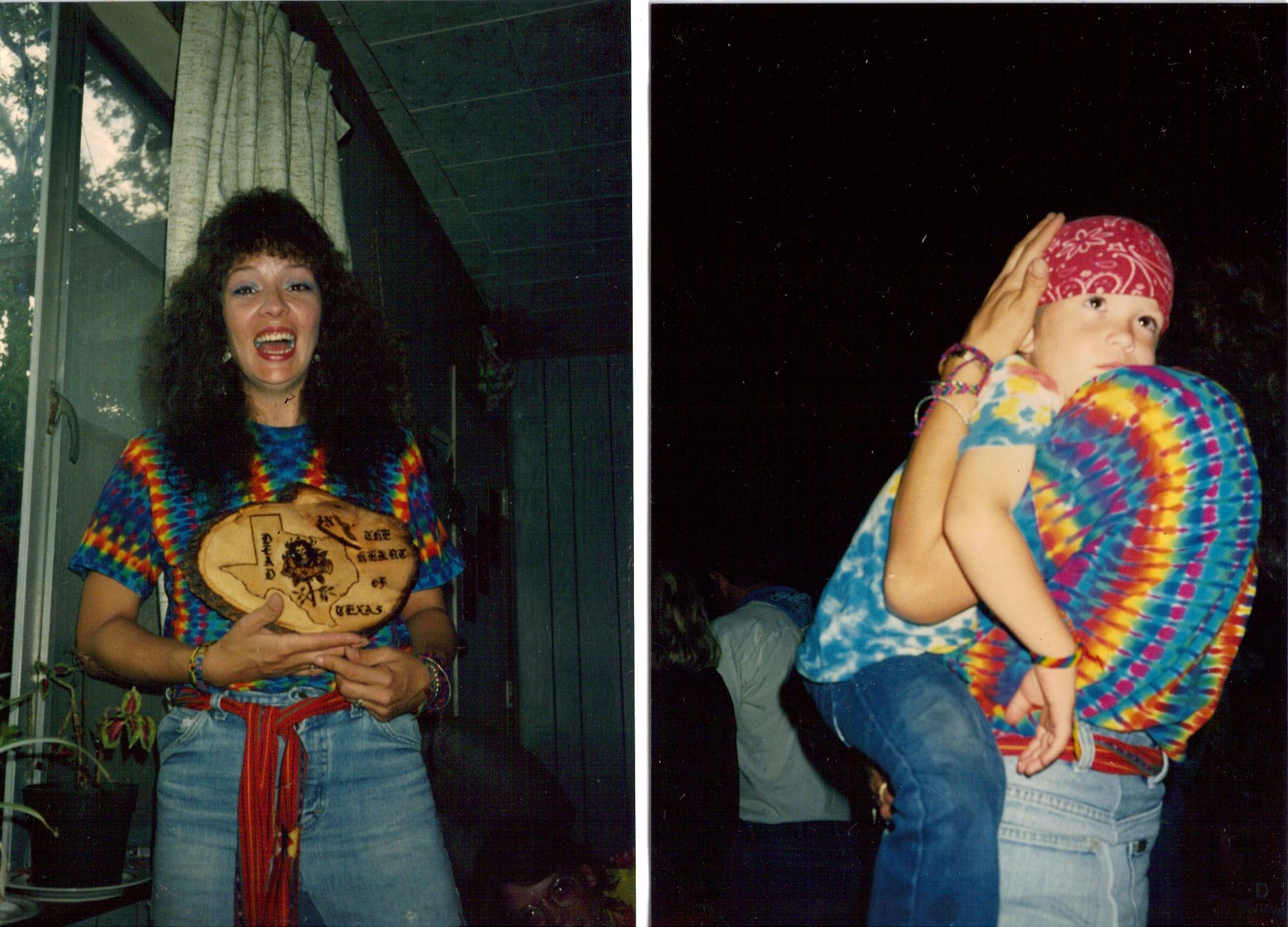 Concerning the show at The Summit in Houston, Texas (which, by the way, is now known as The Lakewood Church aka The Oasis of Love, run by televangelist Joel Osteen). But it was the night of October 20, 1988 when the last real service was held there! That was the night of a family outing for myself,Randy and my wife,(the late) Sandi Gardner and our three sons, Lenny, Hunter, and Cassidy; they were 12, 6 and 4 at the time. Although we had taken one or two with us before, this was the first time we took all three to see a show; and we even brought along their Godparents, Mary and Steve, who had never seen a Dead show before.... as well as a few friends. So this was a really great night with wonderful memories. I remember this was only one of two times when I was able to get all of us to wear tie-dyes at the same time! One of the cool things I remember about this show is that my wife, being the artist she was, had done a beautiful wood burning of the State of Texas with a Yellow rose in the middle of it, and it said "Dead in the Heart of Texas" across it. Just before the show began, she took it to the soundboard and gave it to whomever was there at the time and asked if they would take it to Bobby and give to him for his birthday. They promised they would, but of course she never knew whether he got it for sure or where it might be today. She always imagined that it would be hanging somewhere in the Dead's office or in his home. I hope that it is! Three years later she got a chance to meet Bobby after a show but was so excited she forgot to ask him if he had got it or not. But she did get him to sign a note to our son, Cassidy...to which he wrote, Hey Now Cassidy, and as he signed his name the sharpie began to run out of ink...and Bobby looks at Sandi and says, "what you have here is a dead pen"! Priceless!

Glad I hung on to this first gen tape since my friend Alan no longer has the masters. Only wish the Dead had used a better venue as the sound was never that great in here for any band to play. I remember many of the folks I worked with thinking it strange we were going as a family to see the Grateful Dead, because at that time I was a funeral director so I was already working with the dead all day long!

Reviewer: CaptainToke - favoritefavorite - November 2, 2019
Subject: This is the fall 1988 counterpart of the spring Detroit show
No sbd exists, but there are audience recordings.

Unless you were there, it's hard to make a vivid mental picture of this show by listening to any of the available sources.

The show itself seems to have been lackluster, but still was probably the best party in town that night. Not much else to say.

I do LOVE the detailed personal tales of attending this show. There are several nice ones here.

The Joel Osteen angle makes it all seem a little strange and dreamlike, 3 decades later...

Reviewer: sugareesupreme - favoritefavoritefavoritefavorite - February 10, 2013
Subject: Laid back but still cookin'
It's kind of a rough audience tape but the show makes it worth a listen. Nothing stellar, just good ol' Grateful Dead sounding sweet. Jerry is in good voice, which was not the case during the long East Coast tour that ended with the Rainforest Benefit at MSG the preceding September. Show jumps with a Cold Rain > Minglewood opener, but first set is pretty sleepy until TMNS brings out some sparkle. Again, understated performances but still solid. China > Rider works in a laid back version, Playin' gets lift-off but really has no place to go, so the boys break out Built To Last. Nice versibn, but check out 10/19/89 at the Spectrum for the BOMB - Jerry at peak power. Rest of the show cooks pretty good. Give it up for Houston, home town of the great Billy Preston!!!!
Reviewer: RockDoc50 - favoritefavoritefavorite - February 10, 2013
Subject: GD at the Summit
This was the 2nd or third time that my wife had seen the Dead (I was a concert veteran), and we brought friends from Arkansas with us for the show. Jim, the anthithesis of an archtypal Dead Head, was allergic to smoke, so he wore a gas mask as a preventative measure. Ironically he fit right in with the crowd who barely noticed.

What I remember about the show was that security were real pricks. Every time we tried to dance in the aisles they herded us back to our seats, thereby reducing us to having stand and rock back and forth as if we were davining in synagogue.

I remember the first set as being pretty weak and aimless. The acoustics in the Summit made sound very hollow, and the band was really not at all in synch. Perhaps they were picking up on the Gestapo vibes being laid down by security.

I remember the 2nd set picking up with a great "Built to Last," probably the only real memorable tune from the entire show.

I'm glad we went, but I would have to say overall it was one of the least memorable and less than stellar performances of the band that I have seen.

It's my humble opinion that this is one of the finest Dear Mr. Fantasy >Hey Jude the GD ever played. It's very emotional.

Uploaded by Matthew Vernon on February 8, 2010